The Nashville Shakespeare Performance Archive is a Digital Humanities project funded through a grant from the Folger Shakespeare Library in conjunction with the National Endowment for the Humanities. The awarding grant program is a sub-grant of a larger National Endowment for the Humanities project that is sending copies of Shakespeare’s First Folio around to all fifty states. The archive is created, designed, and coded entirely by students at Belmont University and will be housed in the Lila D. Bunch Library digital collections. 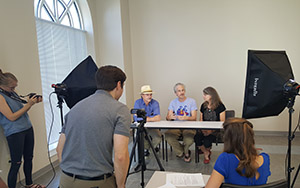 In the fall 2016 semester, students in Dr. Marcia McDonald's Shakespeare course collected images, video, audio, and promotional materials from the Nashville Shakespeare Festival's performance of A Comedy of Errors. In the spring 2017 semester, students in Dr. Joel Overall's Digital Literacies course built the archive by editing images, video, and audio while designing and coding the final website. The project continues each semester with the Shakespeare and Digital Literacies classes. This project allows students to create a digital archive of local productions of Shakespeare, primarily by the Nashville Shakespeare Festival, as a way of investigating local Shakespeare productions and best practices in writing and design.

The archive was launched during a regional conference at Belmont University in coordination with the anniversary of Shakespeare's birthday. The final archive showcases images of the set and costumes, short video clips of the performance, promotional materials, and interviews with actors, songwriters, costume designers, and the director.